Now that I’m a working stiff it seems like the days drag and the weeks fly by. I can’t believe that it’s already August. What I can’t believe even more than that is that I now live in a place where there are actually seasons. In Florida the seasons go as such:

The week before my 24th birthday I went home to pick up my brother Paul to bring him to Atlanta so that we could make the drive up to our grandparents house in North Carolina together the following weekend. On the drive up we took in the beautiful sunset over the hills of north Georgia.

I had Paul take this picture through my windshield, so it didn’t come out as well as I’d have wanted.

My camera doesn’t do it justice, but this was really pretty too.

Once we got into the mountains, the weather cooled off significantly. We spent the next day out on  Lake Nantahala on a pontoon boat that could precariously hold eight people. We had nine and an 85 pound dog. 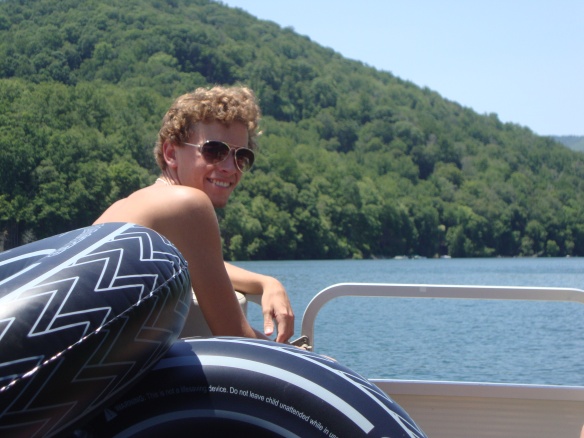 Paul and the tubes on the pontoon boat.

The next day was my birthday and I woke to find Aunt Lin in the kitchen gingerly removing my yellow birthday cake from its perfectly good pan. She cut the dilapidated cake in half and stacked one half on top of the other. Then she began icing this monstrosity with chocolate frosting. This is what is came out looking like:

We decided that it was a battle-worn, weather-beaten army tank and needed a missile launcher in the front of it.

Then, of course, the only logical step was to light the missile launcher on fire.

All in all, it was a good birthday: family, the mountains and a missile-launching birthday cake.

2 thoughts on “It’s hot as fuck and my birthday cake has a missile launcher on it.”