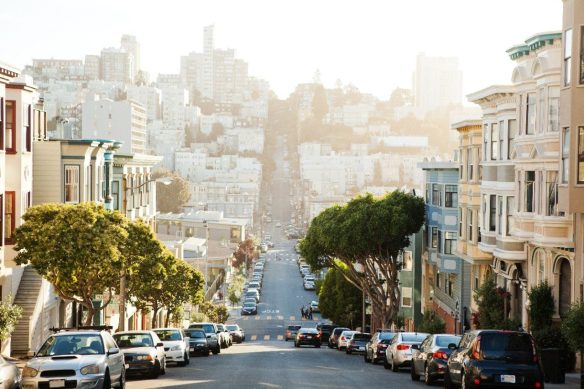 It’s been just over two years since I moved to the Bay Area from Atlanta. I’ve been thinking a lot lately about how completely different it is out here and what it’s like living in San Francisco from a displaced Southerner’s perspective. It’s impossible to capture all the little details when someone from back east asks me “How is California treating you?” Usually I make some generic comment about how nice the weather is, or how crazy it is working in tech. But here’s the full answer ⁠— my collection of observations, musings, and rants about San Francisco and NorCal (yes, it’s really called that).

First, let’s make one thing crystal clear. Despite my drivers license and impending jury duty summons, I will never be a San Franciscan. However, there are times when I’ve come dangerously close. These include when I:

This last one is pretty crazy and happened in November. It was a very strange and bittersweet moment, especially considering that I’ve never been without wheels since I was 16 years old. I’ve always needed a car, but not so living in the Mission. I never drove the damn thing except to move it for street sweeping, and when I did, it was a nightmare trying to find parking. Sometime I would just treat myself to an $80 parking ticket as a kind of fuck-it tax.

But I’m chauffeured to work in a luxury coach with Wi-Fi and I live a five minute walk from the BART station. Lyft is also piloting a rental car program in San Francisco, so there are plenty of options for getting around. This morning I rode an electric rental bike to the gym. But mostly I prefer to walk. Some days I walk seven miles without even realizing it! 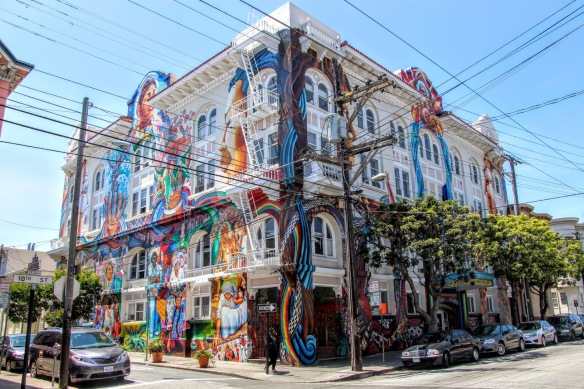 As I mentioned, I live a neighborhood called the Mission. It’s the home of Dolores Park, brilliant street art, countless shops, bars and restaurants, and is a place where people come from all over to people watch, wear their leather jackets and feel cool. It’s like if Little 5 Points and a mariachi band had a baby. On a one-block stretch of Mission Street you can get a street pupusa, a bootleg copy of Gilmore Girls season 3, a $4 happy hour whiskey ginger, a pair of glittery pink hot pants, and a hair cut at a salon called WERK.

The weather here is amazing, all the time. It rarely breaks 70 degrees and there’s very low humidity. When you bring this up someone here will invariably complain about the winter rain. Let’s be crystal clear about this: It gently mists a few times a month in the winter. In many neighborhoods of San Francisco, Karl the Fog is real, but it’s always sunny in the Mission. 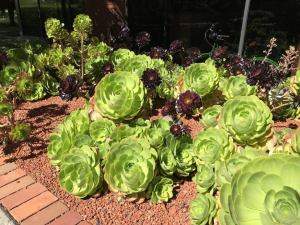 There are palm trees the size of Ford Expeditions and lots of interesting indigenous plants like these succulents which are everywhere. After growing up in Florida, then living in landlocked Atlanta for seven years, it’s also nice living near the ocean again. In neighborhoods near the coast like the Sunset, you can smell the salt in the air. I saw the Pacific Ocean for the first time at Land’s End, a hike with views of the Golden Gate Bridge. 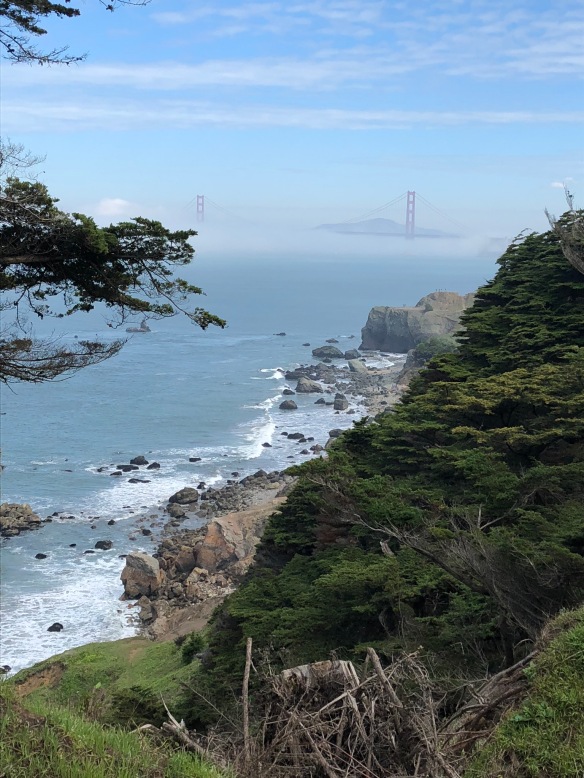 The stories you’ve read and heard are true. The cost of living here is insane.

It’s not uncommon for adults with six figure jobs to be living with their parents or family. Often because their buildings are rent controlled and it’s hard to leave that for a $3000/mo apartment or something more affordable with 3-4 housemates. If you want to live alone, saddle up for $8-9 per square foot per month. And forget about natural sunlight. Your closet will have such sweeping vistas as your neighbor’s kitchen and a sliver of the alley. People talk about rent in urgent, hushed tones with morbid curiosity. Everyone wants to know exactly how much they’re getting screwed over compared to their neighbors.

You can also pay north of $4 per gallon of gas and easily pay $80 for $40 worth of groceries. But damnit, those groceries have snappy copywriting and pleasing package design.

The Belly of Tech 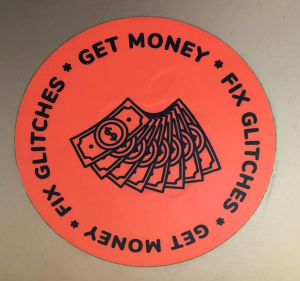 I work in big tech. And I fully realize that I am part of the aforementioned problem in a lot of ways. But unfortunately that is not a problem that I on my own can solve.

I liken working in tech to riding the Scrambler at a carnival. It’s amazing and shiny, it feels like you’re going 100 miles an hour, and sometimes you throw up.

A quick rant: I understand that people stare at their phones everywhere nowadays—that’s the culture we live in—but it’s 24/7 in the Bay Area. I’m not saying I’m not guilty of it too sometimes, but it’s very dehumanizing. You’re walking around in a city full of black Patagonia backpacks with people who can’t even peel their eyes away from their friend’s Instagram story as they fluidly step over the homeless person lying in the small patch of sun on the sidewalk. How’s that for depressing? Or sitting at the bar and half the people there are wearing headphones. What’s the point?

A Word on Homelessness

Speaking of, the homeless situation is also very, very real in SF. My building owners are converting our garage units into apartments to assist with the housing crisis, but I fail to see how adding two more studio units at north of $2800/mo is going to help Seamus, the newly homeless man who’s taken up residence on our block. More housing is great, but who are these astronomical units really helping? People live in tents on the sidewalk, in vans and RVs, or if they’re lucky lean-to’s with no plumbing or electricity, like the author of this harrowing article in Harper’s Magazine. 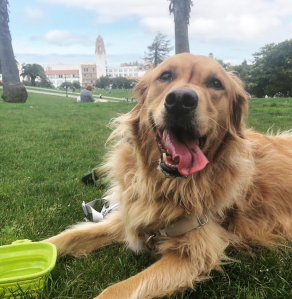 A lot of progressive cities are catching on to dog-friendliness, but San Francisco’s been on that tip for a long time. Kyle Kinane had a joke years ago about San Francisco. He said it’s the only city where you can ask “Is this a dog-friendly lesbian bar or a lesbian-friendly dog bar?” But seriously, this is probably one of the best cities to live in if you own a dog. People bring their dogs inside dive bars, grocery stores, Walgreens, bodegas, you name it.

And walking a golden retriever down the street is like having a key to the city. People just smile at you. When I was walking Stella in my neighborhood, one woman remarked “Bonito perro.” Even though she mistook Stella for a boy, I still managed to sputter out a delayed “Gracias!”

This is hugely important to me in any city I live in or visit, and I have to say, it’s pretty great here. And not just fine art, but music, theater, film and literature. One of the first times I went to Bender’s, a dive bar in the Mission, a patron told me about The List. It’s a weekly email that comes out Friday evenings that bills itself as [sf funk/punk/thrash/ska], but it lists all the shows happening for the next month or so. This list is massive and very punk rock in its design, in that there is absolutely zero design. It’s purposely chaotic. Take a gander at this beast: 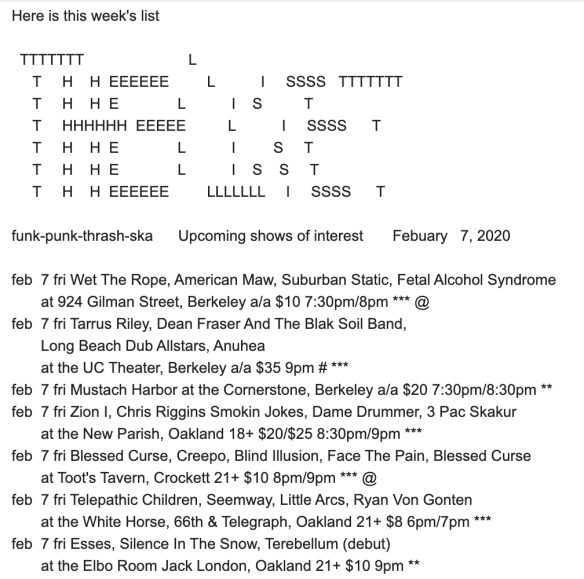 It’s just a really cool homespun thing that the guy who sends it out does for the love of live music. And between San Francisco and Oakland, you rarely have to wonder if a band is going to play dates here.

The fine art scene is impressive in SF too. I have yet to even break the surface of this, but I’ve been to a few game-changing exhibits. One was Soul of a Nation at the deYoung, which captured the spirit of black history and the Black Power movement. This was my favorite piece from the show: The deYoung permanent collection is also really engaging. It puts Atlanta’s High Museum of Art’s permanent collection to shame. They have an array of trompe l’oeil works and my favorite, pieces from the Romantic period. I was also lucky enough to attend the Magritte exhibit at SFMoMA last year. Check out my write-up here.

Then there’s independent films at the Alamo and Roxie. Broadway shows at the Orpheum (I cried twice during Hamilton). And author readings at places like City Lights Bookstore in North Beach and Green Apple Books. Seems like David Sedaris is here every other week. And let’s not forget that McSweeney’s and 826 Valencia are based here too.

Stereotypes sometimes come to life before your very eyes. A few weeks ago I listened to a guy in a trucker hat getting a lavender-polish pedicure explain to his girlfriend for 45 minutes how to make your own oat milk and how much time it saves. It was then that really cemented my reasoning for wearing my noise-cancelling headphones in public (never at bars though).

Another day I was eating at a sidewalk cafe when a large group of 100% naked people bicycled by. Most folks’ reaction when I tell them that say “Ouch.”

I’ve also noticed and had confirmed with other displaced East Coasters that people in SF take things very literally and seriously. Conversations that may have had the potential to be fun and off-kilter come to a screeching halt because hyperbole and expressive turns of phrase always need to be called out and clarified. Way to kill the buzz, people.

All that is to say…

I like it here and I don’t. It feels like a grind a lot of the time, but there are interludes of cool things going on. San Francisco, you may get my rent money and sometimes my dignity…but you will never have my heart. My heart is in the South.