After three and a half years of living in Atlanta, I finally made it out of suburgatory and moved to the city. Not to say that my time in Chambodia wasn’t great; where else in the South can you get a car wash, a lap dance, and an authentic bowl of pho at 3 a.m.?

That said, my life has improved infinitely in the short time that I’ve been in the city. I’ve ditched the cuntadactyl of a roommate I was living with, adopted Humphrey 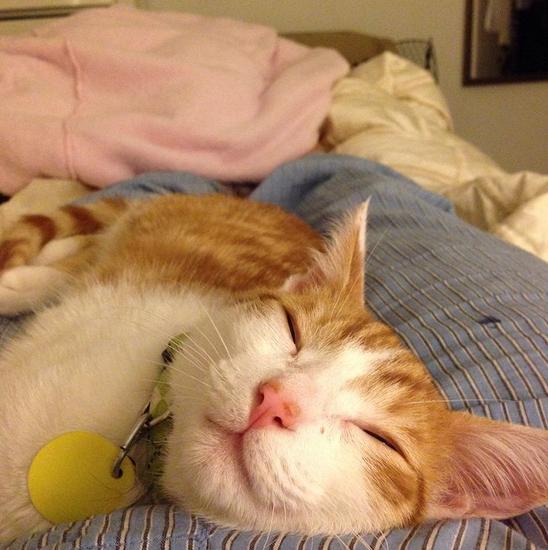 and threw a bitchin’ house party.

Please note that during this time I was in the longest sustained amphetamine-free blackout in personal history: roughly six and a half hours. Therefore most of this recap is a combination of speculation, pieced-together secondhand accounts, and several eyewitness reports.

There Goes the Neighborhood

Enter at your own risk.

The Curious Incident of the Deck in the Nighttime
The most memorable event from party, hands down, was the deck caving in: 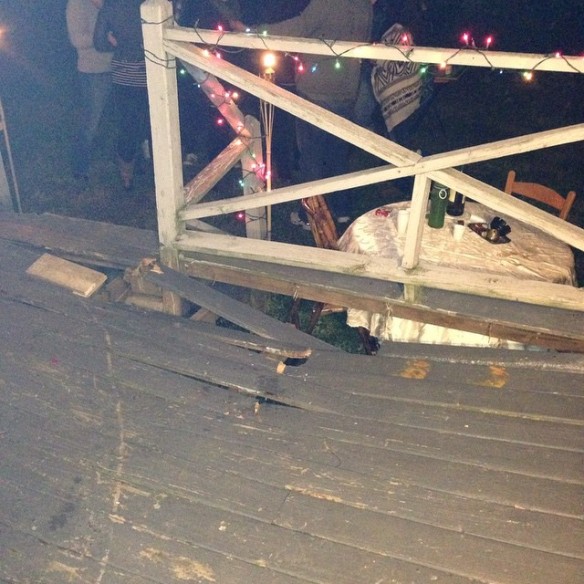 With a combination of horror and amusement, I watched my friend’s face, the one who was standing at the epicenter during the crash, as his life flashed before his eyes. One girl who was absent from the party, saw this photo on Facebook and asked “But how?!” The simplest answer is: five people, a table and 50 years’ worth of rot and decay. And a neglectful landlord.

My landlord’s reaction was exactly as I thought it would be. He laughed for about a full minute, apologized profusely, expressed happiness that no one was hurt, and stated that he’d immediately start getting quotes for repairs. I am honestly surprised that the kitchen floor didn’t cave in too. There’s always next time.

Verbal Assault
A few shots later, people started getting bold and walking across the broken deck. After asking the first seven or eight people to stop, raising my voice each time to no avail, the two random guys who were loosely affiliated with one of guests walked and bounced their way across the deck. By this point I had steam coming out of my ears and screamed at both of them while the rest of the party watched silently. I distinctly remember threatening to “Yoke them up by their collars and throw them both the fuck out.” I hate doing things like that, but it got my point across.

After slamming a few more picklebacks (a shot of Jameson whiskey followed by a shot of pickle juice) things started to get hazy.

Aggravated Assault on a Parked Vehicle
According to two eyewitness accounts, this is the point in the evening where I threw an empty Yuengling bottle at my car for no apparent reason. I know it was Yuengling because I picked up the mercifully-still-intact bottle from the curb the next day. Obviously the big question here is why. My only response is: why does a drunk person do anything?

Knowing myself and my personality, it probably went a little something like this:

Me [holding bottle]: I’m going to throw this at my car.
Sane person: Don’t do that, it’s stupid!
Me: “YOU’RE NOT THE BOSS OF ME!” [chucks bottle at car with look of smug satisfaction on face].

The car is fine but it’s been a bit sullen and expectedly resentful.

The Coat Fire
According to another report, the self-designated photographer’s coat hood caught on fire when she leaned too close to a tiki torch. She had no recollection of the fire until putting the jacket on the next day. The hair on her head narrowly escaped unscathed.

More Deck Trouble
At another unspecified point during the night, a girl’s foot got stuck in the three-inch gap in the floorboards on the front porch. Apparently she acquired a decent scrape.

It Ain’t a Party Without Mad Dog
The most thoughtful housewarming gift I received was a bottle of neon pink Mad Dog 20/20 in “Banana Red” flavor. You know a company is out of fucks to give when they stop even trying to make their bum wine sound like it has real fruit flavors.

This bottle, which I originally wanted to frame in a commemorative shadowbox and hang on my wall, ended up getting consumed by two grown men. According to the guy who put away a third of the bottle, “The only persuasion I needed was that it tasted like banana Runts.” After downing the other two-thirds of the bottle, main culprit then went on to drink one entire cup (or several, who knows?) of the Washington Apple shot mixture neat, and then spent the entire next day in the fetal position in the bath tub, apologizing to his fiance and reevaluating his life choices.

The guy who brought the MD had this to say at the end of the night. I’d say it’s a pretty good summation.